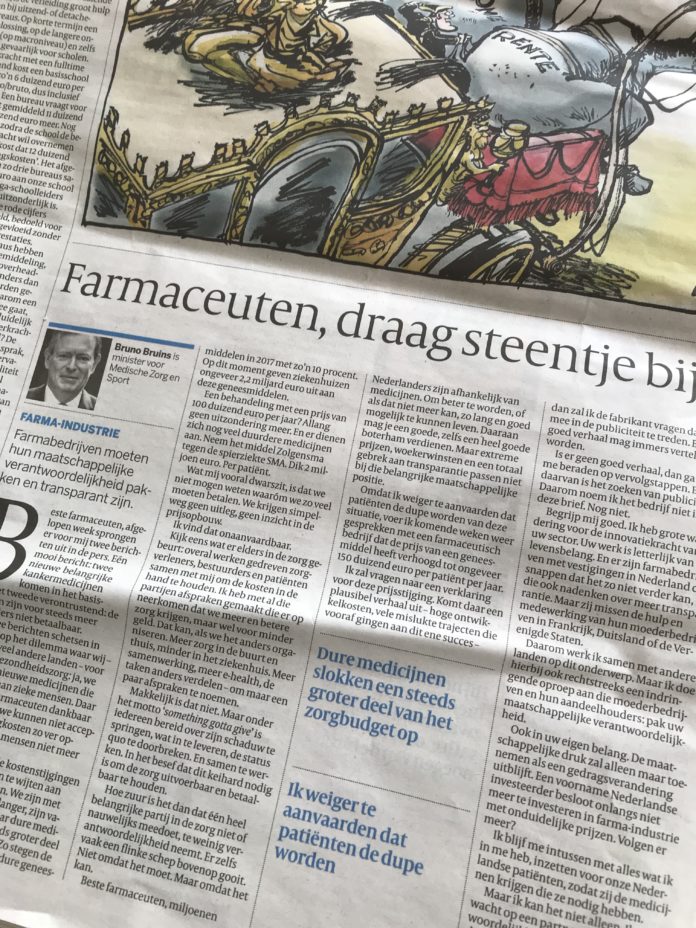 “Dear Pharma,” writes the Dutch Minister of Health, Bruno Bruins in an open letter in the daily newspaper the Volkskrant, “Last week two messages jumped out for me in the press. One nice message: two new important cancer drugs are included in the basic [coverage] package. The second worrying: healthcare costs are unaffordable for more and more Dutch people.” (Here is an English translation of Minister’s letter.)

Bruins mentions the fact that treatments with a price tag of over € 100,000 are no longer a rarity. He points to the two million Euro treatment, Zolgensma, for a rare muscle disease, to show what is in store for the future. ”What particularly bothers me,” he writes, “is that we are not allowed to know why we have to pay so much. We simply get no explanation, no insight into the price structure.” He criticises companies for not taking their responsibility in ensuring that health care remains affordable and particularly takes to task those companies that increase their medicines prices not “because they have to. But because they can.”

The letter is part of the Minister’s preparations for a meeting with an as-yet unnamed company* which has increased the price of one of its products to about € 150,000. He is demanding from the company an explanation for this price hike as well as public disclosure of this explanation. He threatens to name and shame the company when it fails to do this. (Some speculate that this is about the company Leadiant, which we have written about here.)

The Vereniging Innovatieve Geneesmiddelen, the pharmaceutical lobby group in the Netherlands, tweeted that their members do not recognise themselves in the Minister’s description. BIO Holland, which represents the biotech industry, under the somewhat flippant headline ‘Bruno#doeslief’ (which translates to ‘Bruno be sweet’) also expressed feelings of hurt but went on to pose some interesting questions: “What exactly does that transparency entail that you request? How much detail are you looking for? When are you satisfied? And when do you find a pharmaceutical story actually plausible? In short: which conditions and criteria must our pricing exactly meet in order for you to get the coveted “socially responsible” stamp?”

These are interesting questions, and it may surprise some that to answer them we are not entirely in uncharted territory. For example, the EU rules on orphan medicinal products allow the application for an orphan designation when the return on investment is expected to be insufficient to justify the necessary investment. In order to substantiate the claim that the expected return on investment is insufficient, the regulation specifies a list of all the information necessary to make that assessment. This list includes data on past and expected future development, production and marketing costs, details of grants and tax incentives received and an estimate and justification for expected future revenues. A European Commission notice further indicates that the assessment would be made “…on the basis of all past and future development costs and expected revenues.” (For more details see our briefing document.) These requirements could guide the transparency demands of the minister and help formulate a ‘sufficiency norm’ to set fair medicines prices and lower those that can no longer be justified. Some new pharmaceutical rule-making at the EU level is likely to be needed and the ongoing pharmaceutical incentive review offers a pathway to do exactly that. The Minister has already forged alliances with other EU countries to tackle high drug prices. This alliance should also take on board the much needed legislative changes. As the Minister writes, prices are increased not because, “you have to but because you can.” In other words, because the rules allow it. Time has perhaps come to rewrite some of these rules.

* Since then Dutch media has reported that the Minister’s target was the company Leadiant that raised the price of a rare disease medicine 500 fold. The price hike by Leadiant is currently under examination by the Dutch competition authority. For details see here.

[This blog was updated on 8 September to add a link to the English translation of the Minister’s letter and the name of the company concerned.]

We need a Global Vaccines Taskforce, not just a British or European one

The European Commission says Covid-19 vaccines should be global public goods, but do their agreements with pharma reflect this?

Wrapping up 2020 with some noteworthy medicines, law and policy events

Medicines Law & Policy releases analysis, policy recommendations and tools to aid practitioners working on universal access to medicines. We strive to provide information that is as accurate as possible, and we welcome and encourage feedback. For comments or questions contact us at: info@medicineslawandpolicy.net.