PARIS, France: La Revue Prescrire, a French journal for healthcare professionals, has chosen “Private Patents and Public Health” — a 2016 book written by Ellen ’t Hoen — as one of four winners of its 2017 Prescrire Prize Book Award. Calling it “a major reference work on access to medicines and the patent system,” Prescrire praised ’t Hoen’s book both for its extensive collection of data and examples as well as its readability (Medicines Law & Policy contributor, Kaitlin Mara was the editor of the book).

Intended as a comprehensive history of the access to medicines movement to-date, Private Patents and Public Health is the culmination of ’t Hoen’s 30 years of experience promoting better access to better medicines at affordable prices. It tracks the evolution and globalisation of strict rules for patenting, the resistance of public health advocates leading to somewhat greater recognition and use of flexibilities in the patent system, and presents thoughts on how current patent regimes may be reformed to meet the health needs of today and incentivise work to meet the health needs of tomorrow. 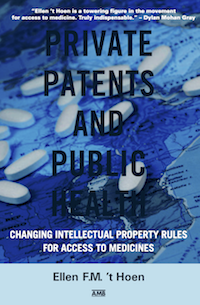 Shortly after the publication of the book, ’t Hoen spearheaded the launch of Medicines Law & Policy, a consortium of experts devoted to providing resources that governments and other stakeholders can use to make their patent system better serve public health. In particular, ML&P’s free-to-use suite of tools provide easy to understand and implement ways to take advantage of several key flexibilities described in Private Patents and Public Health as critical to having increased access to medicines for several deadly illnesses, and in particular for HIV.

The book can be purchased here.
To access the book digitally, along with introductory graphics and tools on IP & access, see accesstomedicines.org